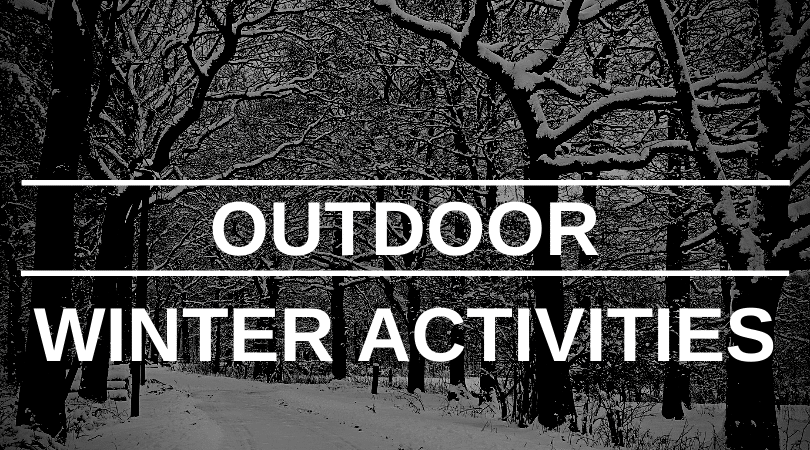 Ah, the snow, so pure and beautiful. All that pristine white stuff just means one thing…it’s time to get out there and have some fun!

Not everyone loves playing out in the wet, cold stuff, but if you have kids, that’s pretty much a prerequisite. In any case, you might just surprise yourself and end up having a great time.

If there is snow on the ground, and your kids are just itching to get outside, here are some great things you can do with them.

Building a snowman is one of the most popular winter outdoor activities. Of course, snowmen usually end up looking more like a mountain of snow than anything, but if you’re patient and skilled enough to roll some large snowballs and stack them on top of each other, you just might wind up with something that looks like a traditional Frosty.

To make your snowman look more realistic, you can dress him up in your own scarf and hat and add features like a corncob pipe, a button nose and, you guessed it, two eyes made out of snow.

Tug of war is a fun game to play during any season, but it can be especially fun in the wintertime. That’s because the team that loses will end up falling in the snow.

The game requires two teams that can consist of as little as just one person each. However, weight should be evenly distributed to keep things fair.

The teams tug on either side of the rope until one team gives up and falls down. When playing in the snow, it’s a good idea for players to dig a trench where they can stand to provide a level ground.

Snowball fights also take more skill than you might think. Most fights will result in simply throwing loose snow at one another. However, if you have the time and skill to pack those snowballs tightly, you will end up with a ball that has enough weight to be thrown.

The downside of this is that a tightly packed snowball can inflict a considerable amount of a pain. Be sure that you aim below the neck where the impact can be absorbed by layers of a down jacket. Nevertheless, be safe, but let kids be kids!

To play this game, all you need is a white flag (any white piece of material will do) and a wooden spoon.

Tie the fabric around the spoon so it looks like a flag. Then bury it in the snow so only the flag part is visible.

It will be up to the other players to try and find the flag. The player who is able to hide his or her flag in the snow the longest wins.

Shovelling might not seem like the most fun outdoor winter activity, but it’s great exercise. It can also seem less like work if you have a friend who can join you.

Another way to make your shovelling adventures more pleasant is to shovel your neighbour’s walk, for money of course.

To play this game, start by making your bases out of snow. This should include home base, 1st base, 2nd base and 3rd base. You should also include a pitcher’s mound.

Next, place a bottle on each of your base mounds.

The player stands on the pitcher’s mound and throws snowballs at the bottles. The player who is able to knock the bottle off the bases using the fewest snowballs wins.

You can go away to a ski resort to sled, but if you have a big enough property, you can get your own sled and have fun pulling friends and family around. If there are hills on your property, or there is a nearby park with hilly areas, head over there for some real downhill fun.

This game requires two teams with at least three players each.

Each team has their own field which is marked using a spray bottle of colored water. A large rectangle is drawn with a center line down the middle to mark off the separate fields.

Each team lines up at the far end of their fields for a kickoff. A member of the opposite team tries to catch the ball. If they are successful, they will try to advance down the field while holding the ball or they can pass the ball to another teammate so they can try moving into the other team’s field without getting tackled.

Snowshoes were originally made for fur traders, trappers and other people who worked in the snow. Today, they are made for recreational use and hikers often wear them so they can continue their hobby in the wintertime.

Modern snowshoes are made with lightweight plastic material and they strap easily around the foot. However, they are still challenging to walk in.

You can have fun hiking in snowshoes or just stomp around your property for an old fashioned good time.

This game is played with two teams with an equal number of players on each side.

The players carve a track into the snow. Each player runs around the track carrying a snowball. Once they complete the track, they pass the snowball to the next player so he or she can run the course. The team whose players complete the course first wins.

To make the game more challenging, create mounds of snow on the course for each team member to jump over.

It’s a lot of fun to play in the snow. These activities are all great ways to pass the time and you might even forget about being cold and wet. Which of these will you be playing this winter?