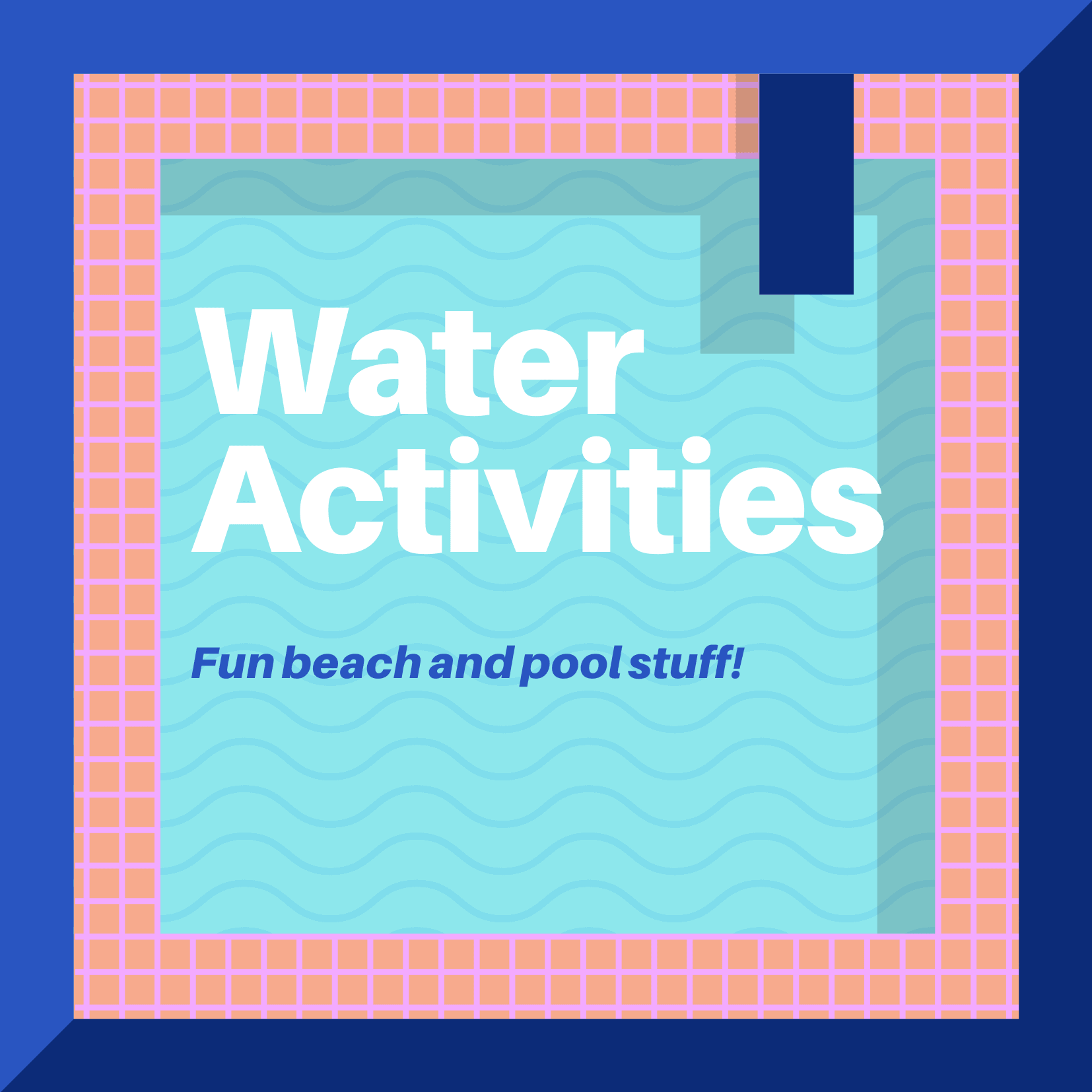 Summer is the perfect time to get outside and play in the sun, sand, and of course, in the water. Of course, not everyone can make it to the beach every day, so this list doesn’t just contain beach activities. Many of these activities can be done in a pool or even just in your back yard!

One fun thing about these outdoor water activities is that anyone can play, including both young children and adults. Of course, when it comes to water games (played in pools or at the beach), it’s best to use your best judgement as to who all should be playing. For example, don’t join a diving contest if you can’t swim.

Without much further ado, let’s get to the activities. Try one or more of these games the next time you visit the beach, jump in the pool, or even just get your hose running in your backyard.

First up is the classic game of Marco Polo. To play this game, you need to either be at the beach or in a pool. For those who are unfamiliar, to play the game, one person is “it” and everyone else needs to stay away from them. The person who is “it” has to keep their eyes closed. They yell “Marco!” and the other players reply “Polo!” The person who is “it” needs to follow the sound to find someone. If they touch someone, that person is now “it.”

There are two basic versions of this game that change its difficulty level. The first way is to have the players who are not “it” stand in one place the entire time. This makes the game easier. To make the game a little more difficult, the other players can move as often as they want. This also adds the bonus of the person who is “it” being able to hear splashing.

Is there anything more fun than a classic water balloon fight? This outdoor water activity can be a free-for-all, a team event, be scored, or have no score. It all depends on how you want to play it. One thing that is essential to this activity is to have water balloons and lots of them.

One fun way to mix up the classic water balloon fight is to play it like you would play paintball. The players can either go on their own, have pairs, or teams. Throughout the game, players throw water balloons at each other. When all the balloons are gone, the game is over. Whatever person or team is the driest wins.

Water Gun Tag is… exactly what it sounds like. One player, the person who is “it,” gets to have control of the water gun. The other players run around while the person who is “it” tries to squirt them. If someone gets squirted, then they’re “it” next. If you want to make the game a little more diabolical, fill the water gun with ice-cold water. This will make sure that no one will want to be tagged!

Hose Limbo adds a wonderful water element to the classic game of limbo. To play this game, as the name implies, you will need a hose. To play, someone needs to hold the hose at a certain height. The other people will try to limbo under it just like they would if they were using a stick instead of a stream of water. Like limbo, if you make it through without getting wet, then the person holding the hose will lower it to make the next round more difficult. If you get wet, then you’re out! Whoever goes the lowest wins. So, how low can you go?

Hop Over the Wave

One game that is great for little kids is something called Hop Over the Wave. This game is pretty much exactly what it sounds like. It can be played by children who cannot swim, but it’s safer to play with kids who can swim, or play the game in shallow water.

To begin, all players stand on the shore. When a small wave comes, everyone jumps over it. If you can jump over it, you move deeper into the water. When the next wave comes, you jump over that one, and so on. If you are playing for fun, then there is no winner or loser. Instead, the game can be a good way to get you used to cold water. If you want to play to win, then whoever gets the deepest before quitting wins!

To do a cannonball contest, you will need to be at a beach or at a pool. Before you try to play this game, make sure that the water is deep enough to dive into without bumping your head. Usually, there will be signs around that can tell swimmers if it is safe to dive or not. If there are no signs and you do not know how deep the water is, then it is best to play it safe and not dive in the water. Also, since this contest involves deep water, it’s best only to play this game with people who know how to swim well.

To play, players run and jump off a dock. If you are strictly doing a cannonball contest, then whoever can make the biggest splash wins. If you want to be a little more creative, then you can jump into the water however you want. Then, the winner is decided by a vote as to whichever jump looks the coolest. Of course, this game can also just be played for fun without any winners or losers.

The Fill the Bucket Relay Race is a great party game that can be played at beaches and even in backyards (although it is best to not play at pools where the ground may be slippery). Both adults and kids can enjoy this game. There are a few basic rules for whoever is playing.

First, the group should be divided up into even teams. Each team gets one cup and a bucket. All of the buckets should be placed in a single line at an equal distance away from the starting spot. When the game begins, the player fills their cup with water and holds the cup on top of their head. They need to run/walk to the bucket and pour their cup into the bucket. They then run back and tag their next teammate to do the same. The first team to fill their bucket wins!

To make the game a little trickier, whether to make it more challenging for kids or more exciting for adults, there are a few rule adjustments you can make. For one, you can play the game blindfolded! This makes the game almost infinitely harder! You can also spin around a few times before running with the cup. This added bit of dizziness can also make things tricky.

Another game that can help to get kids used to cold water is Dive and Fetch. With this game, both players start out on the shore. The first player throws a stick (or another floating device) into the water. The other players run and try to swim to it. Whoever catches it gets to throw it next. There are no losers or winners in this game, just good old fashioned fun!

If you are playing with expert swimmers at a deep lake or at a pool, then you can make the game a diving game. Using sinking neon toys (that are easy to see) makes the game harder. Throw these into deep water so players can dive underwater to catch it. This is a great way to practice holding your breath underwater. If you want to make this a point-earning game, then you can have a couple of people go after the toy at once. Whoever gets to it first gets to throw it next and gets a point.

A Water Balloon toss is a classic game that is best suited for backyard parties. To play this game, the players should be divided up into teams. Each team gets one water balloon. To play, one player tosses the water balloon to their partner. If their partner catches it, they take a step back and throw it again. This continues until the balloon pops. The last team with a balloon still intact wins!

Last up is the Animal Dives game. This is another non-scored game that can be fun for kids who have finally learned how to swim and are now looking for a way to make the beach or a backyard pool a little more exciting.

To play, swimmers pick an animal they want to mimic as they dive. They can dive off a dock or “dive” to the side when already standing in the water. Picking water animals work best. Some great animals to choose from include dolphins, whales, and sharks. Of course, kids can pick whatever animals they want. This is a silly game to play and watch, so both parents and kids can get a kick out of it.

Whether you are at the beach, the pool, or just in your backyard, these games can make for a fun afternoon. So, try these with your friends or family members to get in some summer fun. What game do you think you will try first?