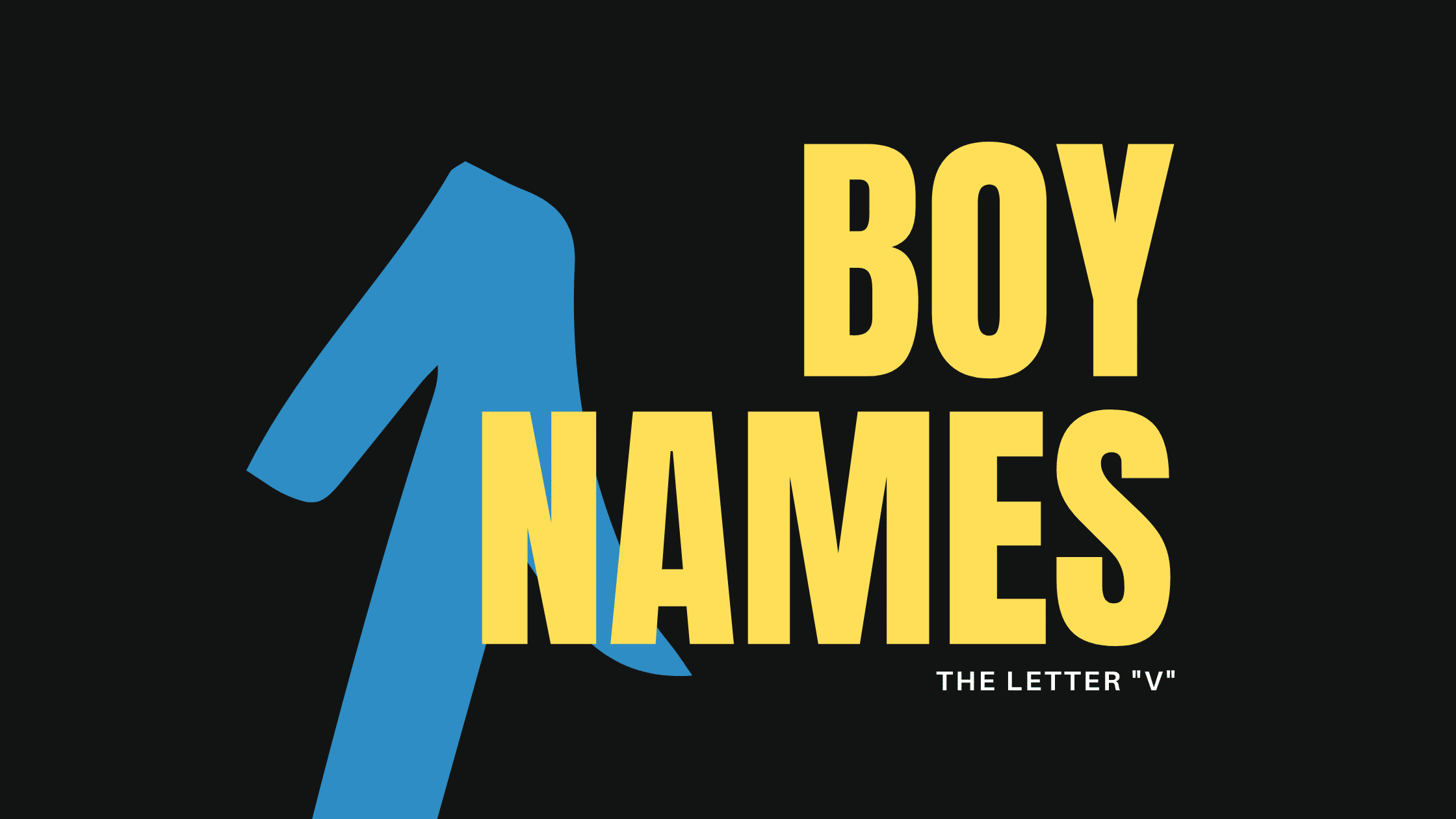 If you have a baby on the way, coming up with the right name is a priority. Your child’s name says a lot about them. Therefore, you will want to choose a name that sets them up for success.

You also want to pick a name that you like and that you think your child will like.

If you are having a boy, you may be considering a name that starts with the letter ‘V’. V is a good, strong letter and it is a bit unusual so, if you name your son a ‘V’ name, it’s likely that not a lot of other children will have the same name.

Because V names are not as common, it may not be easy to find one you like. Well, don’t worry, here is a list of great V names to choose from.

Victor is probably the most common of all ‘V’ boy names. It is Latin in origin, and it means ‘winner’ or ‘conqueror’.

There have been many well know people named Victor. These include famous popes, kings, actors and athletes.

The name is often spelled with a ‘K’ as ‘Viktor’. Other variations include Victorio, Victorino and Victoriano.

Vincent is another V name that is quite popular. It is a Latin in origin and derived from the Roman named Vincentius. The name’s root, ‘vincere’ means ‘to conquer’. It is also a derivative of the Italian name Vincenzo which has a similar meaning.

People named Vincent are often given the nickname Vince or Vinny.

Vance is an old English name meaning ‘dweller of bog” or “one who lives near marshland”. It is a more unusual V name.

Some famous Vance’s include singer-songwriter Vance Gilbert. Ellen DeGeneres’ brother is also named Vance and has his own career as an actor, film producer, musician and screenwriter.

Valentino is both a first and last name. It is derived from the Italian saint, St. Valentino who is also the inspiration for St. Valentine’s Day.

Nicknames for Valentino include ‘Val” and “Tino”. There are also several variations like Valentin, Valent and Valentinus.

For many, the name Valentino will immediately conjure up images of the famous Italian-American film star, Rudolph Valentino. It is also the name of Italian fashion designer Valentino Garavani whose line is simply ‘Valentino’ Valentino Rossi is an Italian motorcycle racer.

If you are a fan of Star Wars, you may consider giving your son the name Vader.

Darth Vader is the main villain of Star Wars. Those that follow the movie series will know that the plot twist is that he is also Luke and Lea’s father. Strangely enough, (or maybe not so strangely), Vader is the Dutch word for father.

Vladimir is a Slavic name. It is derived from the words ‘vladi’ which means ‘to rule’ and ‘meri’ which means great. So, essentially, the combination means ‘great ruler’.

It should come as no surprise that there have been many rulers throughout history that have had the name, Vladimir. The Grand Prince of Kiev was known as Vladimir the Great, and he had three successors who shared his name. There were also many kings, military leaders, presidents and prime ministers with the same name.

Those with the name Vladimir are often nicknamed Vlad. Vadir is another variation.

Viggo is a Nordic name that is popular in Denmark and Norway. There are two theories on its origin. The first is that it’s a Latinized form of the old Norse name Vigge which means ‘battle’ or ‘fight’.

Others think it may be a variant of the Icelandic name Voggur which derives from the old Norse word ‘voggr’ meaning “one who lies in a cradle”.

Today, the most famous Viggo may be Viggo Mortenson, but there are tons for other Viggo’s who have made an impact on the world, including artists, athletes, politicians and more.

Vernon is usually thought of as a surname, but it can be used as a male first name as well.

Its origins lie in Gaul word ‘vern’ which refers to the Alder tree, so Vernon literally translates as “place of alders”. It also means, spring-like, flourishing or full of life.

There are many variations on the name Vernon including Vern, Vernard and Verne. The most famous Vernon may be American economist and professor of business economics and law, Vernon L. Smith.

Vergil or Virgil are two forms of the name used for the Roman poet Publius Vergilius Maro. He is best known for his epic poem The Aeneid, and he is considered a national treasure in Roman culture.

The name is French in origin and means ‘from the green hill’. It can be used as a first name or a surname.

Vidal is a Spanish name meaning life. It is also common in France, Italy, Portugal and America. It can be a first name or a last name.

The most famous Vidal may be the hairstylist and businessman Vidal Sassoon.

Vaughn or Vaughan are traditionally surnames, but they can also be used as a first name for males. The names are Welsh, and they are derived from the word ‘bychan’ which means ‘small’. Contemporary variations indicate that Vaughn means ‘little friend’.

When thinking of the name Vaughn, actor Vince Vaughn may be the first to come to mind. Those with the first name include the American basketball player Vaughn Duggins and the underground comics writer Vaughn Bode.

Vadim is a popular name in Russia and other Eastern European countries such as Ukraine, Romania, Slovenia and Iran. It comes from the Russian word ‘volod’ meaning to rule. Its longer version, Vadimir, is now obsolete.

Variations include Vadym and Vadzim.

Venture is a more unusual boys name, but it can be found in many baby name dictionaries. It derives from the surname Venture which was the name of a family that held a family seat as Lords of the Manor in Cambridgeshire, England in the early 1000’s.

The name is Middle English in origin and derived from the word ‘aventurous’ meaning ‘the venturous’. Variations include the name Ventura.

The most famous Venture was Venture Smith, a West African native who was taken to America to be sold as a slave. He inherited the name ‘Venture’ from his first enslaver who so named him because he considered his purchase to be ‘a business venture’.

Venture was eventually able to purchase freedom for himself and his family and documented his experiences in the book “A Narrative of the Life and Adventures of Venture”.

Although most think of Vivian as being a name given to females, it can be used for males as well. It is derived from the Latin name Vivianus (masculine) and Viviana (feminine). It means ‘alive’.

The name can be traced back to ancient times as it was the name of two early Christian female martyrs as well as the name of a male saint and bishop. Today, it is still used for men and women alike.

Honorable mentions for unique boy names that start with V:

Now that you are familiar with a variety of V names for boys, which will you be naming your child?